The commemoration “Mogliano 1744″, is a journey through time, a direct image of a slice of life of the eighteenth century and the way the Moglianesi lived to transition of the troops of Maria Theresa of Austria, composed of lavish parades of noble Moglianesi families with their little shorts and Austrian troops in gaudy uniforms of the officers, we make and enhance the pride and the spirit of competition in the Contrada’s spectacular racing flag. 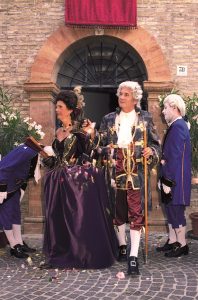 What happened in Mogliano is the story of a perfect host, motivated by a strong sense of hospitality, who managed to tie friendship between distant peoples and their cultures. We are in 1744, Italy is crossed by an expeditionary Austro-Hungarian directed towards the Kingdom of Naples and opposed by Spanish forces; the Friday before Easter come to disturb the peace of the village in the Marches and spread a natural fear of looting and bullying, the Austro-Hungarian soldiers of four regiments.

More than 5,000 people are established in the top of Mogliano waiting for a move or der. Their commander, General Bruone, is housed in Palazzo Forti, another general is housed in Casa Cosimi. After the first impact the Moglianesi are intrigued by what, in fact, is a “peaceful invasion” and give way to a peaceful coexistence with a month of dating, relationships and celebrations. A single fact disturbs this joyous tranquility: the discomfort went from a soldier to a commoner (it is said that, hungry, stole two pieces of bread).

The commander, to wash the shame suffered by the country asked and obtained from the court martial the sentence to death of the soldier. The punishment is considered too harsh by the people and judges, clergy, nobles and commoners implore clemency, to obtain grace. April 30 reaches the starting order for the troops, citizenship and military themselves are all saddened and farewell is made by a solemn procession general.

On the same day, in gratitude for the welcome given, from the headquarters of Macerata comes a “Diploma of the Queen of Hungary”, signed by the commander imperial prince George Christian Lobkowitz, who attributes to Mogliano the title of “City”.

torna all'inizio del contenuto
This is the section of the institutional site of the Municipality of del Comune di Mogliano dedicated to tourism. For information regarding the organization, go to the home
This site is made by

according to the main accessibility rules | Credits | Privacy | Legal notices

You can find out more about which cookies we are using or switch them off in settings.

This website uses cookies so that we can provide you with the best user experience possible. Cookie information is stored in your browser and performs functions such as recognising you when you return to our website and helping our team to understand which sections of the website you find most interesting and useful.

You can adjust all of your cookie settings by navigating the tabs on the left hand side.

Strictly Necessary Cookie should be enabled at all times so that we can save your preferences for cookie settings.

If you disable this cookie, we will not be able to save your preferences. This means that every time you visit this website you will need to enable or disable cookies again.

Please enable Strictly Necessary Cookies first so that we can save your preferences!